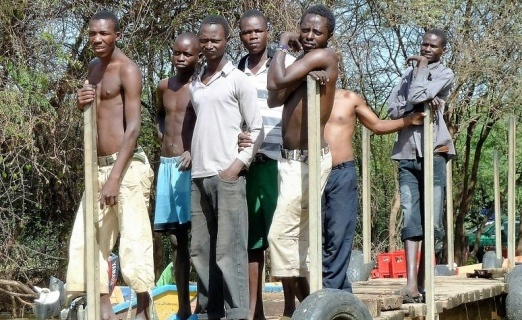 As a mob of about 30 Muslims storms the prayer meeting of an underground community in Central Africa and wants to hurt the church members, a strong hail drives out the attackers. The Christians, on the other hand, are not even getting wet. This leaves questions with the attackers … until these Jesus meet.

It was an experience at first, as many other underground churches have experienced: in a Central African country on Wednesday of last week (March 15), the 40 or so church members – mostly women, almost all former Muslims – met with their pastor, to hold a prayer meeting in connection with a 21-day Lent. The church is part of the underground church network “Assembly of Loving God” (ALG Church), which was founded by the missionary “Bibles for Mideast”.

As Minoo Hussain of “Bibles for Mideast Africa” ​​reported, the church members had invited to the prayer meeting. It should become evangelistic. And so the project had also penetrated to the Muslim leaders of the city. On the said Wednesday, a furious mob of 25-30 people appeared in front of the church. “Allahu Akbar,” they shouted as they forcibly entered the meeting room, destroying any furniture and tearing down the roof of the house.

A Muslim even went to Pastor Musthafa to hurt him with a sword around his neck. But the pastor was suddenly torn away as if by an invisible hand and the attacker only injured himself. Then the other Muslims began to beat church members.

All of a sudden, Minoo Hussain reports, a thunderstorm was forming above the church building. Heavy rain and huge hailstones pelted down, not just on the dry ground, but on the attackers. Only the Christians remained dry and saw according to their own information their Lord Jesus in the clouds, fell on his knees and worshiped him. The attackers fled under the painful hailstorm – but it only rained in the immediate vicinity of the church.

A few days later, the staff member of “Bibles for Mideast Africa” ​​wrote an update to the story – because even one of the attackers had experienced something incredible. Ibn Yakoobi was one of the fanatical leaders of the local mosque. He was part of the mob that destroyed the church that Wednesday. And he was the one who had tried to kill Pastor Musthafa. After the hailstorm, which reached only the attackers, but not the Christians, Yakoobi was full of questions – here obviously a supernatural force had intervened. But who?

Question at the Friday prayer

In the following days, the attitude of many Muslim residents towards Christians changed. And on Thursday and Friday, more and more curious people, mostly women, came to the fasting and prayer meetings in the ruined church. But the Imam and the Muslim leaders were raging. At the Friday prayers, the imam warned urgently against Christians and before attending their prayer meetings. He explained how evil sorcerers performed miracles in Egypt during the time of the Prophet Moses, but that Moses had destroyed all their wonders through greater miracles. “Do not believe and follow the black magic exercised by these Christians – be vigilant!” Were the words of the Imam.

Also Ibn Yakoobi was as usual at the Friday prayer. But his inner questions and doubts did not allow him to remain silent (although a speech is actually strictly forbidden during the Shari’a speech of the Imam). He asked the imam in front of everyone, “Then why can not you perform the miracles that the Prophet Moses did, and destroy their black magic? If you can not, you should not talk about it! “Of course, Yakoobi was immediately thrown out of the mosque and beaten by other leaders. Then they let him lie in the hot midday sun.

Heavily injured and with a few broken bones, Yakoobi could not stand up. But when he was alone, he suddenly noticed a cloud that gave him shade. It looked like the cloud that had protected the Christians two days earlier. Then he saw a bright figure sitting on a throne. The man showed him his hands, which had scarred holes. He also saw sores on his legs and at his side. And suddenly he understood: That had to be Jesus Christ.

And then the figure spoke to him. «I was brutally beaten, injured, crucified and died on the cross of Golgotha. After my death I was stabbed in the side with a spear. But I have risen from the dead. You are healed by my wounds. You are cleansed by my blood. You are saved by my death. And you have eternal life through my resurrection. I give you a new heart and new life. Be faithful! “Yakoobi knelt down and said,” I believe in you, Lord Jesus. You alone are my master and my savior. “And as fast as the cloud had formed over him, she disappeared again.

Now Yakoobi could run again. He went home and convinced his family of the truth in Jesus Christ. Then he also told his friends about the experience – and those who had been involved in the attack on the church now also believed in Jesus Christ. On Saturday, the former assailants collected material and used it to repair the roof of the church. They asked the pastor and the Christians for forgiveness and promised to repair the rest of the building as soon as possible. And then they took part in the prayer meeting. About 200 people came to the meeting on Saturday and heard the gospel of Pastor Musthafa, and on the Sunday service even 350 people participated.

The Imam and his followers are furious, but Muslims in the city are more afraid of saying anything against Jesus or against Christians and also warn their children about it. The imam now wants to gather Muslims from other parts of the country to take action against them. But “Bibles for Mideast” leader Paul Siniraj encouraged the local African churches in a message not to fight physically against the enemy but in prayer: “Pray for the people who are trying to persecute you. The Lord can change them through your prayers. Be brave! The whole Church and the children of God of the whole world pray for you! »

For it is written, As I live, saith the Lord, every knee shall bow to me, and every tongue shall confess to God.
Romans 14:11
DailyVerses.net