The ascension of Jesus Christ Prerequisite for Pentecost, the hour of birth of the church.

Forty days after Easter, Christians around the world celebrate the ascension of Jesus Christ. During these 40 days, Jesus appeared to his disciples again and again, once even more 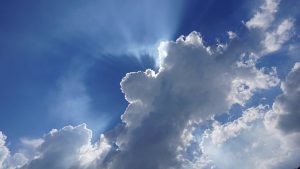 than 500! People at once (Fata Morgana ??) and talked to them about the kingdom of God. The apostle Paul writes (1 Corinthians 15: 6: “Afterwards he was seen by more than five hundred brothers at once, most of whom are still alive today, but some have fallen asleep”). When the risen Jesus said goodbye to his disciples, he said to them: You will receive the power of the Holy Spirit who will come upon you and will be my witnesses in Jerusalem and in all Judea and Samaria and to the ends of the earth . Before his crucifixion he had announced this to them (John 16: 5ff):

5 But now I go my way to him that sent me; and none of you asketh me, Whither goest thou? 6 But because I have said these things unto you, sorrow hath filled your heart. 7 Nevertheless I tell you the truth; It is expedient for you that I go away: for if I go not away, the Comforter will not come unto you; but if I depart, I will send him unto you. 8 And when he is come, he will reprove the world of sin, and of righteousness, and of judgment: 9 Of sin, because they believe not on me; 10 Of righteousness, because I go to my Father, and ye see me no more; 11 Of judgment, because the prince of this world is judged. 12 I have yet many things to say unto you, but ye cannot bear them now. 13 Howbeit when he, the Spirit of truth, is come, he will guide you into all truth: for he shall not speak of himself; but whatsoever he shall hear, that shall he speak: and he will shew you things to come. 14 He shall glorify me: for he shall receive of mine, and shall shew it unto you. 15 All things that the Father hath are mine: therefore said I, that he shall take of mine, and shall shew it unto you.

After he had finished talking to them, he was lifted up in front of their eyes and taken in by a cloud (symbolic of God’s presence). While they were still watching him, two angels stood in front of them and said: “What are you standing there looking at heaven? This Jesus, who was received by you in heaven, will come again just as you saw him go up to heaven.”

To the Bible text:

1 The former treatise have I made, O Theophilus, of all that Jesus began both to do and teach,
2 Until the day in which he was taken up, after that he through the Holy Ghost had given commandments unto the apostles whom he had chosen:
3 To whom also he shewed himself alive after his passion by many infallible proofs, being seen of them forty days, and speaking of the things pertaining to the kingdom of God:
4 And, being assembled together with them, commanded them that they should not depart from Jerusalem, but wait for the promise of the Father, which, saith he, ye have heard of me.
5 For John truly baptized with water; but ye shall be baptized with the Holy Ghost not many days hence.
6 When they therefore were come together, they asked of him, saying, Lord, wilt thou at this time restore again the kingdom to Israel?
7 And he said unto them, It is not for you to know the times or the seasons, which the Father hath put in his own power.
8 But ye shall receive power, after that the Holy Ghost is come upon you: and ye shall be witnesses unto me both in Jerusalem, and in all Judaea, and in Samaria, and unto the uttermost part of the earth.
9 And when he had spoken these things, while they beheld, he was taken up; and a cloud received him out of their sight.
10 And while they looked stedfastly toward heaven as he went up, behold, two men stood by them in white apparel;
11 Which also said, Ye men of Galilee, why stand ye gazing up into heaven? this same Jesus, which is taken up from you into heaven, shall so come in like manner as ye have seen him go into heaven.
12 Then returned they unto Jerusalem from the mount called Olivet, which is from Jerusalem a sabbath day’s journey.
13 And when they were come in, they went up into an upper room, where abode both Peter, and James, and John, and Andrew, Philip, and Thomas, Bartholomew, and Matthew, James the son of Alphaeus, and Simon Zelotes, and Judas the brother of James.
14 These all continued with one accord in prayer and supplication, with the women, and Mary the mother of Jesus, and with his brethren.

Therefore being justified by faith, we have peace with God through our Lord Jesus Christ.
Romans 5:1