David – a man after God’s own heart

In 2 Chronicles 16: 9 read wir : For the eyes of the LORD run to and fro throughout the whole earth, to shew himself strong in the name of them whose heart is perfect toward him. Who among us does not want God, the Lord of this world, to stand on our side and show himself strong in us? That he does us good and that his power works through us?
In the Bible we read of a person who, more than any other, can be an example for us, how to be a person after God’s own heart, in whom He proves his strength.
God says, Acts 13:22 : I have found David, the son of Jesse , a man after my own heart
So God searched, the eyes of the Lord went through the whole earth, and found David, a man after his own heart.
And I want to take a look with you this morning at what makes this David so special that God calls him a man after his own heart and what we can learn from that.
Let’s see how David is described:
1. Top appearance: brownish, beautiful eyes, good shape
Michelangelo carved a sculpture of David, here is a picture of it. 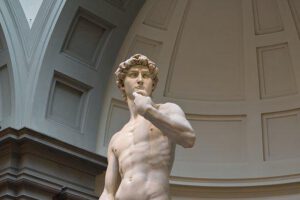